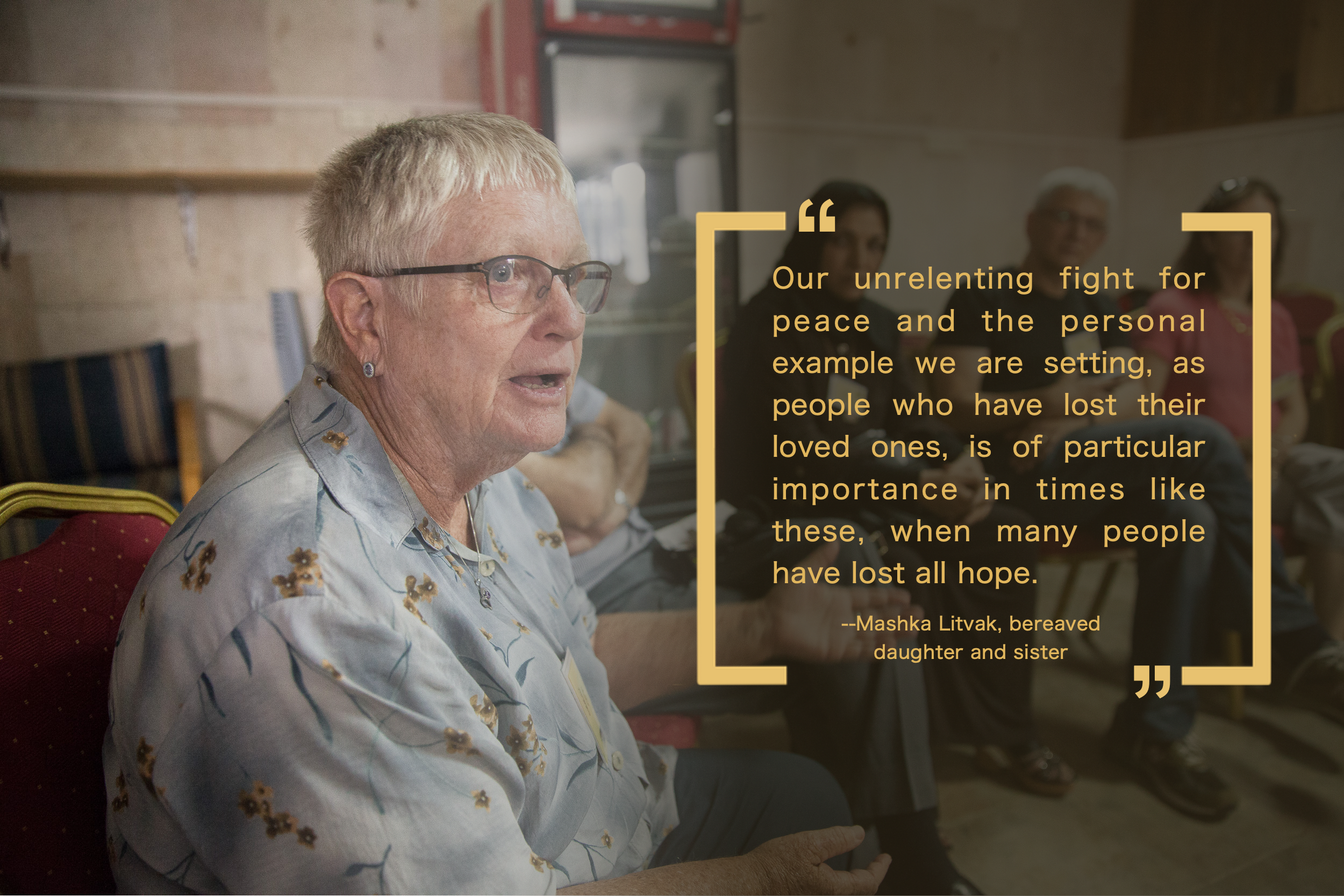 I never had the courage to write letters to the editor or articles for the newspapers. I am doing it now for the first time out of a sense of calling. From the bottom of my aching, bereaved heart, I hope I can convince others to join us in the Israeli-Palestinian Bereaved Families’ Forum for Reconciliation and Peace.

After my brother Arnon was killed in 1970, I decided to become proactive and started my political activity in the late 1970s with one goal in mind – reaching peace agreements in the region, so that other families will not have to suffer like we did.

After many years of activity I came to the conclusion that the best place for me was the Israeli-Palestinian Bereaved Families’ Forum for Peace. This is where I belong, among my bereaved brothers and sisters, and this is the right podium from which I should try to influence public opinion and the leaders of the two nations to reconcile and make peace.

Our unrelenting fight for peace and the personal example we are setting, as people who have lost their loved ones, is of particular importance in times like these, when many people have lost all hope. We disseminate our message through talks in Israeli and Palestinian schools and in reconciliation meetings we organize with members of both nations, which have both suffered too much pain and bereavement.

My father Moshe and my brother Arnon, who are buried in Kibbutz Negba, were both killed in Israel’s wars, because we had no peace. I will do whatever I can so that no other Israeli family has to go through this pain because there is no peace and because of the violence and bloodshed that have become our daily routine.

I have lost my father and brother, but I still have the presence of mind and the energy to continue the fight for peace and for a different reality in my homeland.

To Arnon, my big brother,

Thirty five years went by since the day you were killed. It’s the same kind of autumn; the fields have the same brown colors, just before the wheat sprouts. The first rain fell, and again, I feel the same terrible pain and longing as always. All those years and I still love you and hurt your loss. From one life event to another my longing for you becomes stronger. Sometimes I find myself speaking to you, telling you what I’ve been through, what has happened to me and even ask you some questions and wait for answers. I cry as I speak to you. My tears flow, even after such a long time, as if they have their own will. A month ago your fourth grandson was born, at the beginning of the year. Like every happy event in our family (which happened this time on the Jewish New Year), this event was also diluted down by the sadness of your absence, of you not sharing the joy with us. Your absence is like a wound in my heart which will never heal. It’s hard for me to describe the pain of longing. This pain takes me far away from here. I disconnect from the world I live and sail with you above in unending circles. Only the tears are a sign of my inner storm. When I land back in reality, my body is loose and my soul is shut until the pain lessens.

This is what has been going on for the last 35 years, and in all of that time there has been nothing that has kept your memory away from me, or dimmed my pain and filled the big void which I have inside me. Time froze on November 4th 1970 at 07:10. In your photo which I hung on the wall you are 26. Every time I look at it I see you, my older brother, it is as if time had never passed and you stayed 26.  We disengaged from Gaza, the same city we conquered in June 1967, when you were a soldier. I had to know at the time, that you came out alive from that war, so I hitchhiked into the main street of Gaza with a leading military tank truck. I asked about you, somebody called you and you drove to meet me on a Jeep. We met in the middle of Gaza’s main street. Around us people were still shooting, we hugged and cried. Thirty eight years passed by and only now have we left Gaza.

Thousands of families became bereaved since then. Who knows how many more families will become bereaved.  Exactly ten years ago, on the same day we had your 25th annual memorial ceremony, about ten hours after I put flowers on your grave, Yitzhak Rabin, the Prime Minister who believed in peace and in a future of hope and reconciliation, was murdered. Since then, the fourth of November has become a national memorial day, but for us it will always remain your memorial day. The days will continue to go by, year after year. From time to time I find myself tearing with pain and longing and I never know in advance when the tears will stream down my face. It happens without warning, triggered by anything, an event, something I read that I want to share with you.

I miss you always, you are inside my heart forever, until I’ll join you.

I love you, my big brother,