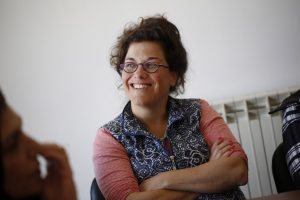 Hello, my name is Meytal Ofer. I am the daughter of Esti and Yaya Ofer, the second of five children. and the mother of Tamar and Hillel. I was born into a bereaved family. My uncle, Bambi, my father’s brother, was killed in the Yom Kippur War when his aircraft was shot down over the Golan Heights on 11 October, 1973. Although I never knew him, his absence was very present in my life and in my family’s. It accompanied the family on every occasion, even in everyday occurrences. My father described the sense of grief and loss as if part of his body had been amputated.

I was raised on a moshav, in a Zionist household, where I was taught to love people and the land. My father was a man defined as salt of the earth. He was loved by all, exceptionally strong, and an esteemed officer who commanded over elite army units. Through my father’s eyes, I learned to love the desert and the godforsaken corners throughout the country on the great journeys we took. He was a man everyone looked up to— he was the one who led, he was the one who knew, he was the one with the complicated answers to complicated questions.

After he left the army, he went into business. During his conscription service he had fallen in love with the Jordan Rift Valley and one of his projects was the construction of the Brosh HaBik’a holiday village in the north of the valley in the late 1990s. Ten years ago he decided to settle in the Rift Valley and make it his home.

On the morning of Friday, 11 October 2013, I woke up and saw many missed calls from my mother. I called home and my mother said the four worst words into the phone: “They murdered Dad overnight.” I didn’t understand and she had to repeat her words. Two Palestinians, 19 and 21 years old murdered my beloved, strong, handsome father with 41 axe-strikes. They murdered him outside his house, as a gift to the Hamas prisoners for Eid al-Adha, the Sacrifice Feast. They murdered him because he was a colonel in reserves. They murdered him without knowing him at all; without knowing what a rare man he was, how much people loved him; how unique he was. They felt his breaths, they smelled the blood; they overpowered him exactly 40 years after his brother Bambi fell from the sky over the Golan Heights.

This is a very difficult day for me. Tomorrow we will go up to the cemetery in Kiryat Shaul, to visit Bambi’s grave and then we will go to Kfar Vitkin to visit my father’s. At the sight of these graves, I want to promise my children a future in this place; a future of a good, co-existent life. I want to give them hope – not as a slogan, but as a real thing, despite the distrust between the opposite sides; despite the long years of hatred. I truly believe that things can change; not at the End of Days, and not with the help of a god that we have to pray to – but with the help of people. People created the horror that occurs here every day and people need to heal the wounds.

To my children who were born a few months ago we gave names of peace-loving people: Hillel gave the moral commandment to all humankind when he said, “Treat others as you wish to be treated,” and Tamar (meaning, “the date palm”) is a tree that gives life. I hope that I will live to see a change in our existence and my children will grow up in another reality.