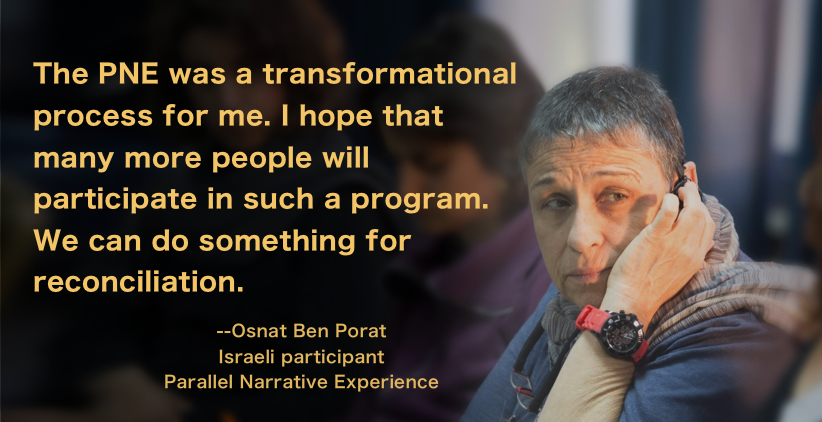 “My name is Osnat Ben Porat, and I am the Deputy Principal at a high school in Hasharon, Israel.

It was after the 2014 Israel-Gaza Conflict (Operation Protective Edge) that I had had enough. I had to do something more significant than going to demonstrations, talking to students and voting for the right party. Just then, a message appeared in my email inbox about a new joint group opening for Israelis and Palestinians of the Parents Circle – Families Forum. This is how I participated in the Parallel Narrative Experience.

In the past, I’ve attended joint groups of Israeli Arabs and Israeli Jews. But this was very different.

First, just the idea behind the project– that it was not necessary to agree, but to learn the Palestinian narrative, to be willing to listen, to understand the different way the Palestinian members of the group perceive reality, how to interpret it and, more importantly, how to live it– was fascinating. It requires a different way of thinking.

The stories of members of the Palestinian group, the way in which all press reports took shape and turned into individual human stories, created a different understanding of the conflict. Those of us who live in Israel may know– but are not fully aware– of what is happening in that place that is so very close to us: the West Bank. Since then I have been reading and listening to the news in a different way, since there are people I now know on “the other side.” News reports became personal.

In my opinion, working on narratives, especially in the way the Parents Circle does– with sensitivity, with proper planning, by properly codifying information and expressing emotions, maintaining the status of each party— was an amazing work that taught me another method, another way of looking at and dealing with the impossible situations that are happening here.

These meetings and this different way of working compelled me to take concrete steps, prompted me to work, so I decided not to abandon the project.

At the last meeting of my PNE group, we were asked to create our own projects, something that could be done for reconciliation.

Thus far, I have been involved in a project aimed at writing a linguistic guide for a preliminary conversation between Palestinians and Israelis who are participating in groups whose aim is to work for reconciliation.

I came to realize that there are people on the other side who think differently. They want to lead a good life. And they’re ready to listen, learn and understand my narrative.

It became clear that in difficult situations, we must communicate with one another and try, as much as possible, not to drown in the battles of life and in despair. We cannot keep the situation as it is, and we have to do something, and we can do something for reconciliation.

This is just one of the Parents Circle’s blessed projects. Despite the difficult situation on the ground, and despite the fact that meeting with “the other side” is difficult, the Parents Circle is making great efforts to continue these meetings. The PNE was a transformational process for me. I hope that many more people will participate in such a program.”