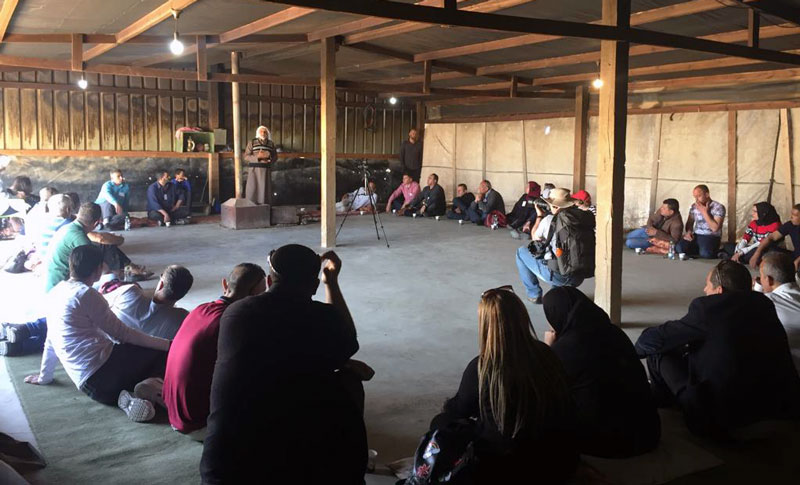 By Yuval, a graduate of the Narrative Group for Medical Professionals
In April, a group of Israelis and Palestinians, members of the Parents Circle – Families Forum and graduates of the Narrative Project, toured three unrecognized Bedouin villages in the Negev. The tour was led by Yaela Raanan, a member of the Council of Unrecognized Villages, who is also a PCFF member and also an alumnus of the Narrative Project. In each of the villages we met people from the village who told us what they were going through. We found villages in very difficult physical condition– houses made of tin or cloth, no power source (except for solar panels that provide only a little of the need) and a little water. The hospitality was cordial. We were served coffee with cardamom and sweet tea, and in one of the villages we even had lunch.

The stories we heard from the Bedouin were hard to hear. All they want is to continue to exist in their surroundings, to continue their tradition as farmers, but the Israeli government first and foremost tries to dispossess them of their land and also to make their lives miserable, in order to make them leave and move to cities built for them (such as Tel Sheva). They want to maintain their traditional lifestyle. It was interesting to hear our Palestinian partners calling on the Bedouin to fight, but the Bedouins in their own way believe in a way of holding onto the ground. It was also interesting to learn that the children’s trips to schools began in Shulamit Aloni’s time– so, as it turns out, with another administration, positive things can also be done. The cruel methods used by the government include the demolition of their homes, the restriction of their agricultural way of life by various laws, the construction of various sites on their lands (such as the facilities of the Israel Electric Corporation and the Ramat Hovav waste area), or a new thing altogether: the villages themselves. It is absurd to discover that even when the IEC site was built on village land, the village itself did not receive even a small portion of the electricity produced in its area.
Despite all that, we met determined residents who believe in their path and in patience. I am convinced that if the Bedouin were members of a non-Muslim or Arab community, the attitude toward them would be like toward a nature reserve in an industrial and alienated world.