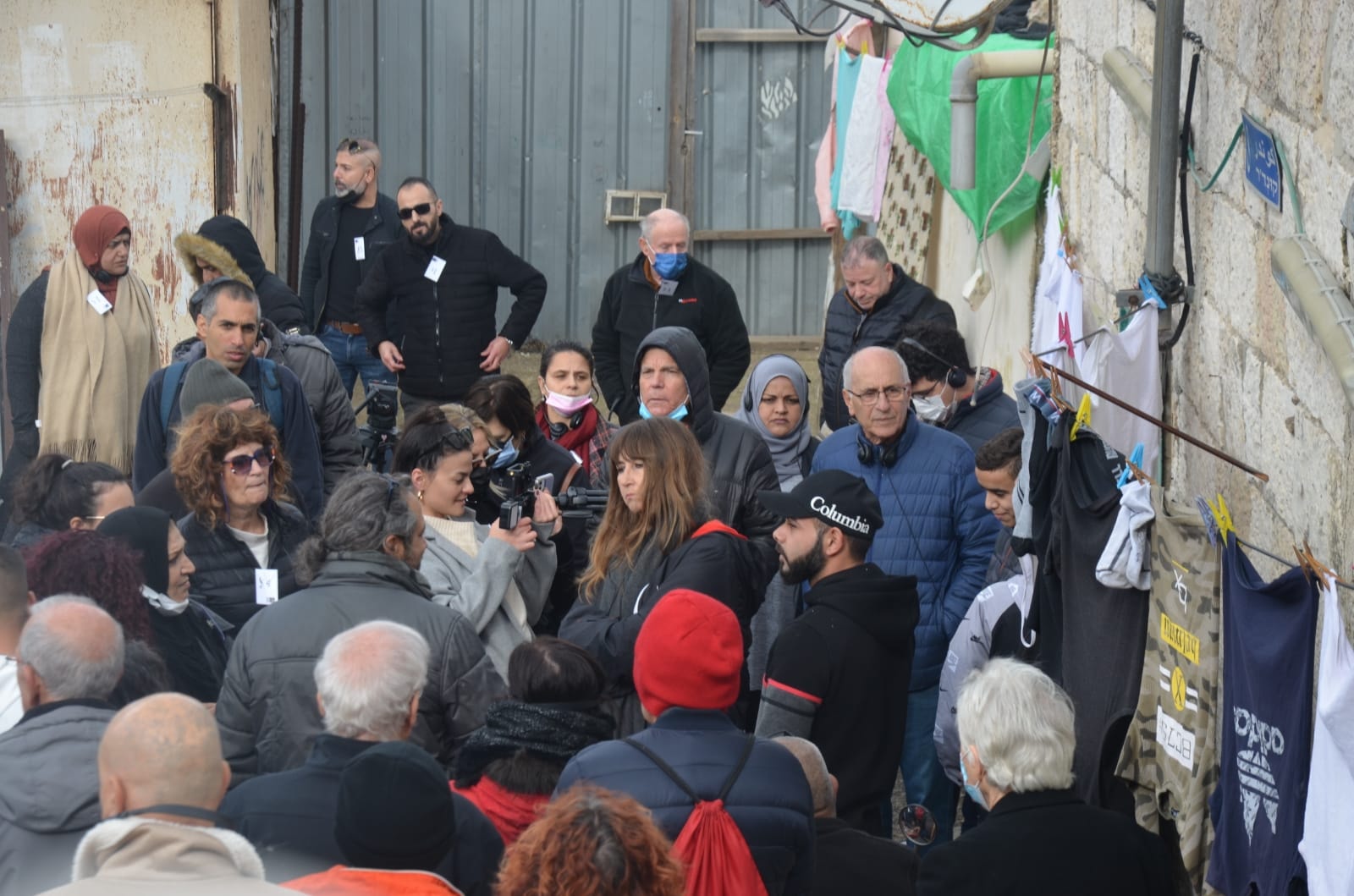 On Christmas Day, 50 activists from the Parents Circle – Families Forum travelled to the Sheikh Jarrah neighborhood in East Jerusalem to demonstrate solidarity with the struggle of the 600 Palestinians living there.

In recent months, the Israeli government has increased pressure to evict families from their homes in the neighborhood. Well-financed settler NGOs are using a variety of semi-legal means to achieve this, proclaiming Jewish ownership prior to 1948 and offering material incentives to settlers to occupy the homes of families that have already been evicted.

During the May conflict in Gaza, Sheikh Jarrah became a second “front,” with anti-eviction protests and extreme police violence erupting throughout East Jerusalem.

Our host was Saleh Diab, who joined us despite his exhaustion, having spent most of the previous night pursuing the release of three activists arrested at yesterday’s peaceful weekly protest. Residents and supporters have demonstrated every Friday for the past twelve years, with the police and settler-provocateurs regularly attacking the protesters.

During our visit, we entered the Salem family house, scheduled for eviction next week. Fatma Salem has lived in her home for 70 years. Her grandfather received the little stone house in an agreement between the Jordanians, who then held the land, and UNRWA, which administered it. The eleven members of her family have been subjected to constant harassment. We met her 13 year old grandson through a window, as he is on strict house-arrest for the past five months, falsely accused of burning a settler’s car. When people are evicted, not only do they get no compensation, they are fined thousands of dollars to pay for the trucks hired to evict them and for the cost of the police who secured the action!

Aside from the legal absurdities, we heard the residents speak of the moral injustice of the attempts to “Judaize” much of East Jerusalem, where similar eviction initiatives are underway. One of the residents asked, “What would happen if the 700,000 Palestinians who fled or were driven from their homes in 1948 were to demand to move back in?”

As our visit wound down, the residents’ despair was palpable, but so was their determination to struggle on. They poured us cup after cup of good bitter coffee and shared that our visit had heartened them. We promised to bring our account of what we saw in Sheikh Jarrah to broader circles of potential supporters.

The Parents Circle doesn't want new members; we want the cycle of violence to end. Our members are our greatest resource in combatting hate and building peace.
Support the work of the Parents Circle: https://buff.ly/2DfKsF4

“Anyone who knows the Parents Circle knows that it is one of the most inspiring organizations in the country” - Israeli Participant, Dialogue Meeting
Sign up for our newsletter to get updates on our work in Israel and Palestine, events in the US, and more: https://buff.ly/2kwkSQ5