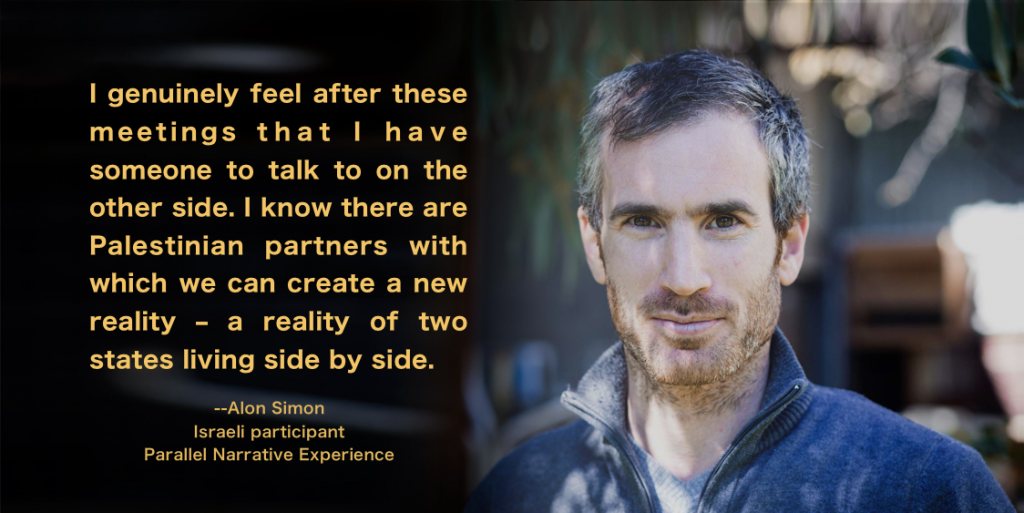 A few years ago, I participated in the Narrative Project. I experienced meeting with the Palestinians in the group in two different ways.

During breaks from the organized discussion groups and seminars, I met very hospitable, smiling people.

They shared with me pictures of their families and homes, told me how much they wanted peace, and their belief that all people are equal. Above all they dreamed of a normal life – of working for a living, caring for their family, taking a vacation without fear or worry, and without the constant threat of roadblocks and curfews.

The meeting that took place in the organized discussion groups was completely different. The atmosphere was of Israelis opposing Palestinians, of nation against nation.

From the first discussion group the Palestinians were enraged with us, the Israelis. It made no difference that the Israeli participants were all people who wanted to see an end to the occupation. In the discussion groups we were representatives of all Israelis from all generations.

Many of the Palestinians had stories about violence they had experienced at the hands of the army and security services. They spoke of how they had been detained, interrogated, beaten and humiliated. We Israelis heard the stories and didn’t know how to react. I did not know what to say. What could I say? I am on the stronger side, free to go where I choose, and have never been humiliated or abused by the authorities.

The feelings in the Israeli group ranged from empathy and guilt to anger and frustration. We were angry that the Palestinians could represent themselves as an entirely innocent people and Islam as a religion of peace when from among them come horrific acts of terrorism. We were frustrated by the lack of balance in the discussion. One side spoke of its suffering and accusations and the other was expected to listen and accept it in silence.

Our group took a tour to Lifta, a village at the Western edge of Jerusalem that has been abandoned since the 1948 war. According to our guide, the Israeli state had done everything it could to clear the Palestinian residents from its territories, using violence and intimidation. After the war the Palestinians who fled were not allowed to settle back in their homes, which became Israeli settlements.

The trip shook my beliefs and perceptions. I had always seen Jewish settlement of the land inside the borders of Israel as just, and the Israeli settlements in the West Bank, on the other side of the Green Line, as immoral. But after my experience at Lifta, the whole morality of the state of Israel has been thrown into doubt. It forced me to question the country where I was born and grew up, and that my grandfathers fought to establish.

Now that I am conscious of the nakba, should I believe that Petah Tikva, the first Jewish settlement in Israel, is no different than the outposts in the West Bank, as one Palestinian participant claimed? Are the contemporary settlers of the West Bank the new Zionists – as they claim – equivalent to the Zionists that established the state? I still cannot accept these conclusions, and I’m still looking for arguments strong enough to reject them.

So what can I say? It’s clear to me that the reality is far less black and white than is often portrayed. Most people – including leftists and humanists – tend to stick to their own reality and close their ears to conflicting opinions. They fear that if they listen to other perspectives their own truth will bend and crack, and even lead to complete acceptance of the opposing view. It’s difficult to concede that there can be elements of truth in both narratives. If I took anything from these meetings, it’s the determination to overcome this instinct and to truly listen to the person facing me with an open mind.

I recently read an article about whether it was good to use the term ‘Palestinian’ in Israel. The article quoted Menachem Begin, saying “If this is the Land of Israel, we have returned to it. If it is Palestine, we have invaded it. If it is the state of Israel, we have established legitimate rule throughout it; if it is Palestine, our rule is not legitimate in any area of it.” I want to get away from Begin’s conception, Israel or Palestine. I want Israelis to accept the Palestinians and their suffering and needs, as I wish they would recognise us, with our suffering and our needs. I want each side to loosen its grip over their national narrative.

The Palestinians are people just like us. Before the meetings, I had the impression that they had the moral high ground because they were under occupation. Now I think less like this. They have corruption, racism, violence and provocation – just as we do.

But to finish on an optimistic note, I genuinely feel after these meetings that I have someone to talk to on the other side. I won’t always like what they have to say, and I don’t think we’ll agree about everything, but I know there are Palestinian partners with which we can create a new reality – a reality of two states living side by side.