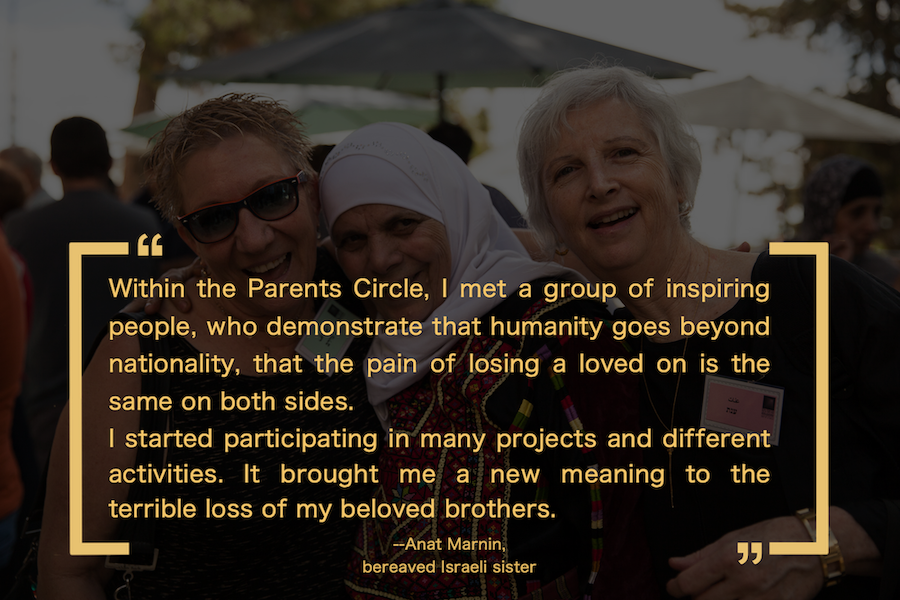 I was born in Israel, the pampered little sister of 2 older brothers, growing up in a small town in the north of the country. With the support of my brothers, who “trained” our parents well, my childhood and even, adolescence, went smoothly. I was a good student, I danced a lot, and attended youth movement activities, feeling safe. I was proud to be recognized everywhere as my brothers’ little sister. When the time came, like all other Israeli youth, my brothers were recruited for military service, and had great plans for afterwards.

In October 1973, I was 16, at the beginning of my 2nd year of high school. My brother Yair was 19. Close to me in age, I resembled him most. He was kind and warm, with a constant smile on his face. He still had 2 years of service ahead. Pinky, our elder brother, was mature and charismatic. We both admired him. At 23 he was already married and about to become a father. My parents emigrated from Argentina 22 years earlier, not because they had to, but because they chose to, (out of idealism). My mother was an English teacher working for the Ministry of Education, and my father was an engineer, working for the Ministry of Agriculture. They managed to establish a warm and loving family, living a modest comfortable life, and were content of their achievements, optimistic about the future.

And then the war broke out. Israel was taken by surprise when Syria in the north and Egypt in the south attacked us. Both my brothers fought as combat soldiers in the Armored Corps. From the first day of the war, there was no sign from them, until they were declared “missing in action”. This was their status for almost a month. During that month I held on to the belief nothing had happened to them, because there was no way I could have imagined my life without either of my brothers.

But the worst inconceivable horrible news was delivered to us. We were told they were both killed on the morning of October 7th, Pinky in the north, Yair in the south.

I felt, at that time, that my life had come to an end.

We remained a crushed and broken family. Each of us reacted and behaved differently. My Mom kept herself busy and active, interweaving instruction of the English language, with educating her students to values and virtues, and perpetuating the memory of her sons. Her ability to express her thoughts and feelings, and her willingness to give and receive love, has helped her survive until this very day.

My Dad fell silent. Days on end he was silent. And on those long sleepless nights, he would sit and write Pinky and Yair letters that bore no address. Until there were no more words left, and his heart – that could take the pain no longer – stopped.

I feared that if I revealed my pain, it would spill over and consume everything on its way…

And I? I was told I must be strong for them. So I tried to get back to my routine, as if all was normal. My closest friends, who were  there for me then, and still are today, stayed by my side throughout – even when I lost the passion for life. They were surprised by the fact that I functioned normally nonetheless. Inside me there was chaos, but I shut it out and hid it well, so that I could be of support to my parents. They, in turn, kept their commitment to support me and support each other. And so it happened that each one of us cried alone. We could not share the pain. I feared that if I revealed my pain, it would spill over and consume everything on its way…

It took me many years to find reasons to live, and the emotional resources to somewhat rehabilitate my life. I am now a mother of 2 adults, a spouse and a professional dance movement therapist.

About 15 years ago I joined the Parents Circle, because I felt there’s a mission that must be accomplished.

Within this unique organization, I met a group of inspiring people, who demonstrate that humanity goes beyond nationality, that the pain of losing a beloved sibling or child, spouse or parent, is the same on both sides, the blood has the same red color, the tears have the same salty taste. I started participating in many projects and different activities. It brought me a new meaning to the terrible loss of my beloved brothers.

A project in which I am intensely absorbed as a co-facilitator, always with a Palestinian partner – is the Narrative Project.

On different occasions, I found myself profoundly moved, witnessing some special encounters. A few of which I will share with you today.

The project is based on the PCFF members’ experience in conducting reconciliation work, through the use of personal narratives. The program aims at establishing trust, empathy and mutual understanding between Palestinians and Israelis, through the parallel narrative experience. The method of this project offers an opportunity for hundreds of Palestinians and Israelis to express themselves, by telling their stories, demonstrating the most difficult consequences of the conflict. This dialogue is created as a corner-stone, towards reconciliation and conflict mitigation.

The program is made up of trust-building sessions, history workshops, visits to significant sites of the other and mutual dialogue. The groups are distinguished by a common de-nominator of the participants.

As part of the project, PCFF produced the documentary, Two Sided Story.

So far I’ve facilitated 7 groups of this project. Each group was challenging, and the interaction between the members was always surprising. At moments it seemed as if the tension was about to explode, but we managed to contain it, so the group overcame the crisis, and even grew stronger. One of those moments was during a session of the ‘Combatants for Peace’ group. These people do some tremendously important work together, but they had never taken the time to just talk to each other about their personal lives. The narrative project gave them the opportunity to do so. At a certain moment, a Palestinian man got extremely excited when he shared an experience many Palestinians are familiar with:

“I know, because I’m that soldier, and that is why I’m here today”

“Do you know what it’s like when at 3 am you hear terribly strong knocking on your door, and without having a minute to get dressed you find yourself out in the street, freezing, your little daughter terrified and doesn’t stop crying, your wife trembling next to you, your son tries to hide himself, and you can’t help them. You see the soldiers brutally messing your house, their dog peeing, and you can do nothing to stop it? Do you know what it’s like?”

Then an Israeli sitting next to him nodded his head. “Yes” he said with empathy “I know, because I’m that soldier, and that is why I’m here today”. There was silence, there were tears and hugs.

That was yet another proof that empathy, as a basic human skill, works when the conditions allow it.

In another group, of students who live near the borders, an Israeli girl who kept silent through the whole weekend, burst out saying “I can’t take it anymore! I feel I’m being blamed for all the agony caused by the occupation which I’m very much against. I listen to you, I feel for you, but I need you to listen to me, too. I live in a Kibbutz near Gaza and for years now I’ve been waking up with the siren, having to run to the shelter, because of the Kassam bombs aimed at us. I have to keep my schedule of studying and working, knowing that not far from me someone is constantly planning to kill me, wondering if I’ll survive this]day or maybe it’s my last day on earth”.She was crying when she spoke, and kept crying for a while. The response she got from the group, mainly the Palestinians, but a few Israelis joined them, was far from being empathic. Some said she’s spoilt, because she does have a siren to warn, when she should run for shelter, while in Gaza they have nothing to protect themselves from the bombs thrown by Israeli airplanes. Others employed statistics, to argue that there were very few casualties from Kassam missiles. At that point, she was abandoned by her co-participants. But two weeks later, in the closing session, while role playing “the other”, surprisingly the Palestinians could identify with her point of view, and played her role in a remarkably authentic way. That was yet another proof that empathy, as a basic human skill, works when the conditions allow it.

On different occasions, I found myself profoundly moved, witnessing some special encounters through my work with this project, like my experience with my Palestinian friend, Bushra Awad.