I’m married, a mother of eight children and a homemaker. I got married at an early age, and after five years I gave birth to my eldest child, Mahmoud. Mahmoud brought meaning and color to my life, filled it with happiness and hope. He was beautiful and wonderful and so glorious. My life was focused on raising him, while giving him the best possible education, so “something great will come out of him”.  Unfortunately, our financial situation was tough, and so when Mahmoud grew older, he started working while at school, to help his father improve the family’s financial situation.

On January 24, 2008 the Israeli army killed two young men from Beit Omar in the Goush Etzion area. The next morning, the forces entered the village to destroy their houses, and many of the village residents took to the streets to demonstrate and protest the fact. My son Mahmoud was among them.  The army soldiers launched an attack on the people and caught the young men who threw stones at them. The army used ammunition and tear gas in response. Mahmoud came home with his younger brothers and told me: “Don’t let them come out of the house. There are confrontations and it’s dangerous outside”. I asked him to stay in the house as well and to continue studying – he was already in twelfth grade, and he answered that he’s staying home and that I shouldn’t worry about him. I turned back to my house work, assured that Mahmoud was in his room. I didn’t notice him leave the house.

After a few minutes I heard heavy gunfire. I ran to Mahmoud’s room, but didn’t find him there. I asked his father to go out to look for him and bring him back home.

After Mahmoud's death my heart was filled with revenge, sadness, pain and endless sorrow.

At this point I had a very strange and unpleasant feeling. I felt something terrible had happened to Mahmoud. Immediately afterwards I heard the siren of an ambulance. My husband didn’t return home.  After about fifteen minutes our neighbor’s son came to tell me that Mahmoud was hurt in the incident and was taken to the hospital, but that he’s in good condition.

I rushed to the hospital crazed. I was so angry with Mahmoud that he left the house and didn’t listen to me. I told myself that I will punish him for it when he comes home and gets well. I arrived at the hospital in Hebron and found my husband crying and yelling, “Mahmoud is gone”. I ignored him not wanting to believe or even hear what he said or what my brothers and sisters said, as well as the other relatives. I refused to go into the hospital because I didn’t want to see his body.  I looked at him one last time at the mosque, before they prayed for him and buried him.

After Mahmoud’s death my heart was filled with revenge, sadness, pain and endless sorrow. I shut in and gathered myself, ignoring my husband, my home and my children. I was consumed with sadness and by my crying over Mahmoud, and I wished for death, so I could see him. Three years passed this way.

One day, a friend suggested I join the Families Forum (PCFF). I refused adamantly and asked her how could I shake the hand of the Israeli side that killed my son? A little while afterwards that same friend invited me for coffee in her house. When I arrived, I met an Israeli woman called Robi in the living room, and I immediately turned to leave. I didn’t want to meet her or talk to her, but then the woman got up and asked me to stay. She said she would like to hear the story of my son, Mahmoud. I sat down and began to tell her. When I showed her his photograph she burst out in tears. She later told me her story and the story of her son, who was killed by a young Palestinian man in 2002.

After my meeting with Robi, I understood that our tears are the same tears. Our pain is the same pain. As mothers who lost their sons, we could share our emotions with each other.  I later participated in a joint meeting of Palestinian and Israeli mothers who have lost their children. The atmosphere in the meeting was different, appeasing and honest. We talked about the suffering of both sides and about the fact that we all agreed that the bloodshed must be stopped, that peace must be made between the nations, and that the occupation must be ended.  I joined the Forum believing in its message, and I am a prominently active member still. 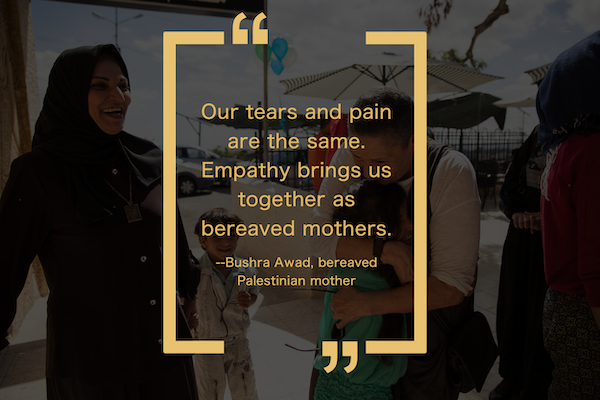